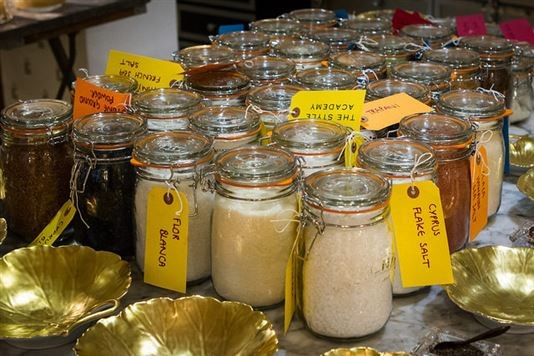 Will artisan salt become popular in the UK? How do you use it? Matt Brady discovers the possibilities.

Before trying it, I think it would be very easy to shrug off ‘artisan salt’ as something of a fad.

To be honest, I had a slightly cynical opinion before trying some for myself by pure chance: a Persian Blue salt, mined in Iran; and a Danish smoked pyramid salt.

Curiosity piqued, I went to the UK launch of SaltWorks, a company that sells over 100 varieties of salt, to see if artisan salts are really worth their, er, salt.

Tasting salts is a little difficult, as they make you feel very thirsty and you can’t try all that many in a row. But certain salts in the range really leapt out. Their ‘Wildfire’ salt has all the smoky residue of a hot November bonfire. As I crunched down on it, I imagined what magic this could work sprinkled on meat while preparing it for a barbecue. Or how their toasted onion salt would liven up a simple slice of cheese on toast.

Vanilla is another highlight, particularly sprinkled on the assortment of high-quality chocolate at the launch supplied by chocolatier Iain Burnett. It might sound like an odd concept, but the salt highlights the peak of the sweetness before the vanilla reaches your taste buds to calm the salty rush.

There were a fair few forgettable salts among the jars, but if you taste some of the more interesting flavours, I think the potential for their uses in cooking becomes apparent.

The range is due to be launched at 75 retailers at some point in October and will be available to purchase online too. So keep an eye out in cookery shops if you’re interested in trying them out.

Cooking on salt blocks is growing in popularity, and if you want to see a video of them in action, we have a video here from Kerstin Rodgers. I tried a couple of prawns cooked on these at the launch event, and I have to admit I was impressed. An even layer of seasoning is distributed across the whole prawn by the hot block. This means that the entire skin is just slightly salty, which is enough to bring out the flavour of the seafood without overwhelming it.

The salt blocks themselves are also rather beautiful, despite losing their initial sheen forever once heated for the first time. However, they’re not exactly the most practical thing to cook on, at least on a regular basis, as they require plenty of time to heat up and cool down.

SaltWorks’ salt blocks are currently only available at Divertimenti in London, but a mail order service will open up soon. The blocks are going to be sold for between £40 and £85, depending on which size you choose.

The term ‘selmelier’ was coined by Mark Bitterman to describe his work – he’s an expert on salt. He’s the author of two books on the subject. Salted is part history, part salt definition guide and part recipe book. His second book, Salt Block Cooking, is packed with information about the origins and uses of salt blocks as cooking and presentation devices and includes 70 recipes.

You might not think that salt could be made to feel particularly exciting, but Bitterman does a good job of keeping the subject alive in his books. Flavoured salts, he explains to me, are created by spraying crystals with essential oils, or blending them with extracts or ground herbs and plants.

To make smoked salt, the salt undergoes a basic cold-smoking process. Smoke is passed through into a separate chamber from the fire to where salt “is spread out on a screen” for the smoke to infuse.

He says that it’s both well-rounded and versatile – a “go-to general purpose finishing salt” that works just as well with seared pork and grilled seafood as it does in chocolate brownies.

Among his other top picks are Cyprus flake salt – “white crystals [that] deliver a counterpoint of sparkling pungency to salads” – and sel gris (also sold as ‘Sel Gris de l’Ile de Noirmoutier’) which is made in ancient salt pans on France’s west coast. Mark describes them as having “Coarse, moist, mineral rich crystals, [which] provides lush mineral support to grilled steak, haunches of roast beef, whole chicken and turkey, and any other food with a hearty disposition.”

“Throw out the box of artificially refined kosher or cheap industrial sea salt,” he pleads, “and give your food the salt it deserves!”

I'm not sure if I can call myself a total convert, but I can’t deny that there is some promise among the range. Some just offer variation in the 'strength' of the salty flavour, but others could add a very unique touch in cooking. And they're definitely nicer than cheap table salt.

Prices in the UK haven't been announced for the artisan salt range, but SaltWorks' US site sells fairly small jars for around $10-$15 (£9-£6), though a few are more expensive.

Have you tried artisan salts before? If not, would you give them a go? Let us know your thoughts in the Comments below.

Salt & pepper: are you seasoning your food correctly?