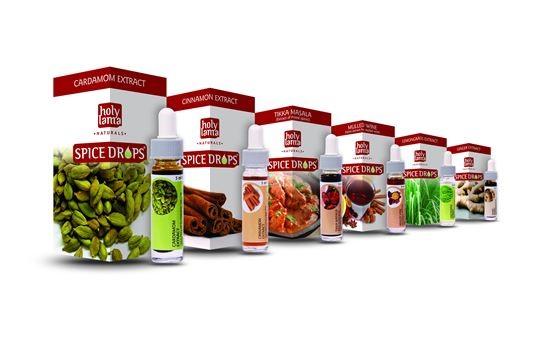 A new product promises to pack all the flavour of fresh herbs and spices into a drop bottle. Is it any good?

The first thing you’ll notice about Holy Lama Naturals’ Spice Drops is their odour. You can even smell the contents with the bottles firmly closed, which makes their strength immediately apparent.

They have a shelf life of three years, each takes up a tiny amount of space and the company is very open about the manufacturing process. They’re pure essences, concentrated to the point where they can infuse food with flavour with just a few drops.

We decided the tikka masala bottle would be a good trial to see how they fare. Since it’s a blend of spices, we figured the more complicated flavour profile would be harder to cram into a tiny bottle.

Mixing together a simple blend of ingredients for the tikka, we then added five drops of the tikka masala extract. Four drops should, according to the bottle, be equivalent to a quarter of a teaspoon of powder. As I’m making just one big bowl of it, five seems reasonable.

You’re supposed to add these near the end of cooking, so I dutifully added my five drops, a drop at a time and tasting after mixing. I then mixed all of it in well for a couple of minutes, then plated up.

The drops do a very good impersonation of the spice combination we’ve come to know and love in our tikka masalas – they are made from real spices, after all. The flavour is quite strong: maybe I should have held a drop or two back. But it's definitely a tikka.

That probably won’t ruin most meals but if, for instance, you’re working with a very overpowering flavour like the rosewater extract, it might make the resulting dish’s flavours far too strong.

I don’t think they’re quite as nice as the real thing, and that would be particularly true if you had the option to work with fresh rather than dried spices. But a couple of favourite spices bottled and ready to go for weekday use would make a convenient addition to the kitchen.

Have you tried Spice Drops? Would you? Let us know your thoughts in the Comments below.

The lovefood guide to spices

Getting kids into curry: Indian recipes for young people