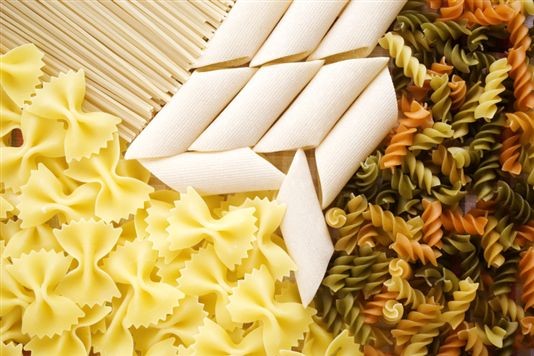 Making your own pasta needn't be a headache. It takes some time and patience, but the end result is beautiful.

A little while ago, I was invited over to Jamie Oliver's restaurant Fifteen for a pasta making session. As many of you will know, each year Fifteen takes 15 unemployed young people and trains them to become chefs.

Jamie Oliver wanted the restaurant to be based on a concept of social improvement rather than financial gain, and it was great to see the effect it had obviously had on the lives of 2005 graduate Lloyd Hayes and two apprentices who were just about to graduate themselves. All three seemed to have a very positive outlook on life, and the opportunities that they had been presented clearly meant a lot to them.

Lloyd ran us through making pasta dough (a damp, but not wet cloth is the trick to keep pasta you've set aside from drying out), a few basic shapes, and explained how you can add colour to the mixture by blitzing up various herbs.

Fifteen chef Jimmy Grant then showed us how he likes to make pasta dough. He prefers to make a mound of flour then create a well with his hands. Then he cracks the eggs into the well, moves around the outside, gently pushing the flour a little at a time into the middle, mixing and repeating, until the egg is mixed well in. Then he kneads well and leaves to rest, covered, in the fridge. This method requires a big work surface though, and makes a bit of a mess!

It was then our turn to make some pasta shapes of our own. Pasta machines are hard work, as you need to push the pasta through again and again to make sure it's worked thoroughly and ready for cooking.

But, for me, they're still better than doing it all by hand. In Italy, it's no surprise to find people making pasta using just a rolling pin to stretch out the dough, but that's a lot of effort. I don't consider myself lazy, but I don't have as much stamina as an Italian grandmother apparently!

It's a rewarding activity though, as once you've pulled your pasta through the machine it becomes rather silky, almost transparent, and absolutely delicious when cooked and served with sauce, salad and olive oil.

In the video below from Jamie Oliver's Food Tube, his mentor and culinary legend Gennaro Contaldo shows us how to make the perfect pasta dough. Unlike Lloyd Hayes's preferred method, Gennaro uses a bowl for mixing the flour and egg together, which might be preferable if you don't have a very large surface to work on.

Once you've got the hang of making the dough, and tried out some basic shapes, you might want to get more adventurous. In the video below, Gennaro demonstrates how to make a range of shapes such as gnocchetti, farfalle, lasagne sheets and more.

Jamie Oliver has just launched his new hard anodised pan range with Tefal, which features a Titanium non-stick interior and riveted stainless steel handles for a professional grip. He says: "These pans are really versatile and will help you raise your game in the kitchen. They're seriously hard-wearing, non-stick and oven safe."

The Lovefood guide to... flour