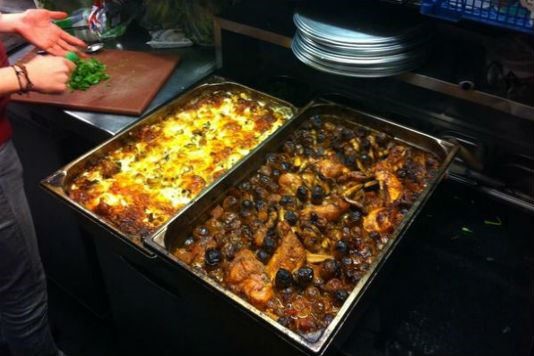 Food rescued from commercial skips is on the menu at innovative cafes in Bristol and Leeds.

If you've watched Jamie and Jimmy's Friday Night Feasts on Channel 4, you may have spotted The Real Junk Food Project, a volunteer organisation dedicated to preventing food waste by creating meals from it.

The group hit the headlines last year with its Skipchen cafe, located in the popular Stokes Croft area of Bristol. This is actually isn't the group's first cafe, that was in Armley, Leeds. Unfortunately the northern original now faces closure after its premises were put up for sale, although the group is currently serving up meals at the Trinity Cafe in the city.

Where the food comes from

Sam Joseph, co-director of the project and the person who set up the original Leeds cafe, told the Guardian back in October: “We get the food from anywhere and everywhere that has food going to waste.”

Although technically it’s illegal to remove food from supermarket skips, the Real Junk Food Project argues that it's ethical, and prevents otherwise perfectly healthy food from going straight to landfill. The restaurant is conscious of food safety and hygiene, and rescues the food from the bins as soon as possible, getting it straight back into refrigeration.

However, the group says it's in talks with a major supermarket to take its waste food and has already struck a deal with Nando’s to take surplus chickens off the chain’s hands. It also takes unwanted food from farms via the Gleaning Network.

In another unique twist, customers at the cafes can pay whatever they like for food. For families struggling to afford to eat, the cafes allow people to eat for free.

Even after the cafe closes, staff will offer any food that hasn’t been used to passers-by.

What's on the menu?

The menus include a wide variety of different dishes depending on the ingredients that can be sourced Highlights at the Bristol Skipchen over the past few months have included lobster, roast dinners, salmon and more.

Sam Joseph told the BBC: “We have a real mix of people coming to the cafe and they sit on two long tables, so you could have a businessman sitting next to someone who is homeless one lunchtime.

“People sometimes think they will be taking food from the needy when they come to us but the truth is that there is so much to go round.”

The cafes highlight the problem that the UK has with food wastage. It is estimated that around seven million tonnes of food and drink is wasted in the UK each year, and more than half of that food was edible when chucked. That not only has an impact on our wallets, but also of course on the environment, and although wastage has reduced by 21% in the past few years, there’s still plenty more to be done.

There have been ongoing campaigns to change the rules on sell by, use by and best before dates. With a good proportion of the food binned by supermarkets remaining within use by dates, but past sell by dates, it’s clear that plenty of perfectly edible is being wasted every day. There have also been calls to remove best before dates from products which wouldn’t cause harm if not used by the date given.

A major survey of supermarket bosses earlier this year revealed that most ignore the advice of use by dates on products from their own supermarkets when eating at home. Mary McGrath of the charity Foodcycle told the Mirror back in May: “Simpler and more accurate expiry dates would help consumers and supermarket bosses alike. We waste shocking amounts of edible food every day.”

Would you eat waste food? How strictly do you obey dates on packaging? Let us know in the Comments below.

How you can help food waste charities