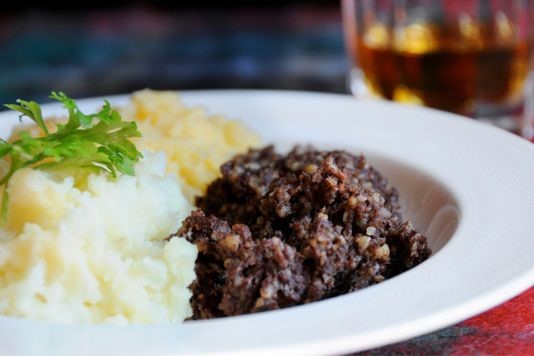 As Burns Night approaches, we take a look at Scotland's national dish – best enjoyed with neeps, tatties and a tot of whisky.

Since his death in 1796, the memory of Scottish poet Robert Burns has been celebrated on or around his birthday, 25 January, with a Burns Night supper. Following a traditional running order, guests eventually stand when the haggis is delivered into the dining room to the sound of bagpipes. The reader then recites Robert 'Rabbie' Burns’ Address to a Haggis and cuts the casing of the cooked haggis during the line: "His knife seek rustic labour dight".

The haggis is then eaten, and toasts of malt whisky, more readings, dancing and general frivolity follow the meal. It’s safe to say that an awful lot of haggis is consumed this time of year at Burns suppers, not only in Scotland but across the globe.

However, there are arguments to suggest that haggis is not from Scotland at all. In Laura Mason and Catherine Brown’s book The Taste of Britain, they write: "There are plenty of medieval and early modern English references to establish it was a dish eaten throughout Britain."

Regardless of where the haggis originated (evidence points to the Romans), the Scots are the ones who embraced, nurtured and now celebrate the haggis as the glorious meal it is.

What exactly is a haggis?

To make a haggis, the pluck (liver, lungs and heart) of a sheep are washed and boiled. This meat is then minced and mixed with oats, onions, suet, salt, pepper and spices, often including mace. This mix is sometimes passed through a mincer once more before being moistened with gravy.

It was then traditionally sewn into the sheep’s stomach; nowadays artificial plastic casings are often used. The haggis is then boiled for about an hour. This thrifty dish is often served with neeps and tatties (mashed turnips and mashed potatoes), though food journalist Dorothy Hartley wrote that "Nothing is served with haggis, except bagpipes and whisky".

Once cooked, the grayish oval-shaped ball is cut open to reveal a peppery, rich interior that tastes like liver. The oats help to bind the meat and add a slight nuttiness to the offal. Of course haggis is not for everyone – some can find the intricate flavours of the pluck a little overpowering and, as with most foods, quality and subsequent enjoyment can vary wildly.

As Hugh Fearnley-Whittingstall explains in The River Cottage Meat Book: "At their best, they are a delight, and at their worst a disgrace."

A whole heap of haggis

Haggis is eaten throughout the year, from deep fried versions in humble chip shops to the tables of fine highland restaurants. But throughout January and February, production increases vastly.

Gordon Little, of Mogerleys Quality Butchers in Dumfries, makes over 1,800 kilos of haggis in a typical January alone. Mogerleys has been producing haggis since 1876 and Gordon still sticks to an exacting recipe: "We make them all traditionally with natural casings. The proper way."

The history of the clootie dumpling