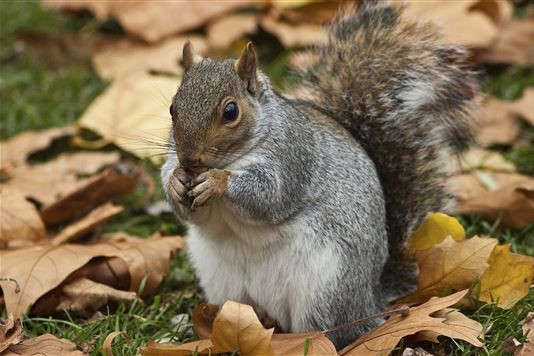 There’s been a surge of people taking an interest in squirrel meat recently. Lovefood cooks one up and puts it to our taste testers.

Following its brief inclusion on the menu of The Cinnamon Club restaurant in Westminster, squirrel meat has become rather sought after.

A butcher in Suffolk supplemented its dwindling rabbit stocks with squirrel meat earlier this month, selling out in three hours. The Elveden Estate butchers explained to the Daily Mail that rabbit numbers were on the decline and that there is now a limit on the number allowed to be killed in order to keep the population stable.

Hence the replacement meat, which has become something of a hit.

Director of The Wild Meat Company, Robert Gooch, thinks that the fact that interest in the meat is rising is largely down to the novelty factor. His company sell a variety of game meats, including squirrel, and he was happy to supply us with one to try out in our own kitchen.

People don’t often “appreciate the quality of the meat” he told us, since squirrels are “commonly seen in parks and gardens.” Robert added that, conversely, in the US squirrel is rather popular, and an American colleague also confirmed this to me.

American chef Georgia Pellegrini says that it’s a particular favourite of the eastern states, and according to a 2011 report (the most recent) on the hunting habits of Americans, 1.7 million people in the States hunted squirrels that year. That's significantly more than the 1.5 million shooting at rabbits. “Squirrel hunting is more American than apple pie” says Pellegrini.

The first thing I notice about squirrel as I tried to section it up was the high bone-to-meat ratio, which isn’t surprising considering its small size, but makes for rather difficult work when portioning it out. A very heavy and sharp knife is required to cleanly and safely cut through the bones and cartilage.

The main chunks of meat are to be found on the hind quarters, but there’s also a bit on the front quarters, and a small amount around the lower back.

While cutting, I realised that there’s little bits of hair clinging to the meat here and there, which isn’t the most appetising thing, but then again, it’s no worse than a spot of unshaved pork.

I browned the meat in a frying pan and then quickly boiled it with a bay leaf in the mix to finish the job, hoping to retain most of the flavour while not obscuring it. While cooking, a musty odour became very noticeable, though this is possibly the result of the meat having sat in plastic packaging for a couple of days. It did clear up after a couple of minutes.

I tried to shred as much meat off the bones as possible, but it is hard going. Apparently the pieces are often served breaded in the States, much like KFC chicken.

I can see why. You really need to get your mouth around a joint and strip it down with your teeth for maximum efficacy, but wanting to give everyone the chance to taste it, I carry on ripping scrappy pieces off the carcass with a fork and sharp knife.

Strangely, the squirrel meat was compared with pretty much every other meat. “Tastes like chicken” came the inevitable response from a few people, but others said it was “light, a bit like pork,” or even compared it to lamb.

I think that our collective inability to make a singular comparison tells us that squirrel has its own distinctive flavour. Personally, I would describe it as a light game meat that I would happily eat again – it reminded me somewhat of duck, and I wasn’t alone in that thought either.

One person looked at the plate for a few moments before commenting that they simply couldn’t do it. “I just keep thinking of squirrels running around in the park!” Others were put off by the smell, but those who got past that found it quite tasty and most said they'd give it another go in the future.

Would you ever try squirrel, or are you revolted by the thought? Let us know in the Comments below.

From rodent to roadkill, should we eat more of these meats?

Why we should be eating insects

Can buying food past its Best Before date save you money?