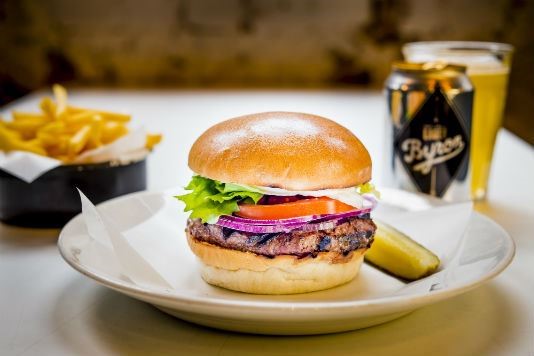 From burgers to burritos, these new chains are growing fast. Here are the stories behind their success.

From Byron to Bill's to Barburrito, we take a look at what they offer and why they’re doing so well.

Quality premium burgers, craft beers and a simple menu are three reasons behind Byron’s popularity. It’s the brainchild of Tom Byng, who set up the chain in 2007 after spending four years in the US and realising the UK was missing a restaurant which resembled his favourite diner.

There are 51 branches, 37 of them in London, with new openings in Bury St Edmunds and Canterbury later in 2015.

Byron uses ground fresh Scottish beef and puts quality over quantity in a short but sweet menu. Another unique selling point is its emphasis on craft beers. The regularly updated list includes the company's own Byron Pale Ale and Byron Lager, which is brewed and canned in collaboration with Camden Town Brewery in London.

Now with 63 restaurants, and new outlets opening in Taunton and Colchester, Bill’s eclectic menu has proved a big hit in the UK.

Its décor is another pull. Recipes and the day’s specials are chalked onto blackboards, while tins, jars and packets line the grocery shop-style shelves, and cutlery is stored in vintage oatmeal tins. There’s a dish for every food craving, from mezze and fishcakes to fresh fish and chicken curry, with a focus on using fresh produce and seasonal ingredients. It also offers breakfast, afternoon tea, cocktails and kids’ menus plus plenty of vegetarian and gluten-free options.

The man behind it is Bill Collison, who ran a high street greengrocer in Lewes, East Sussex. When a flood hit the town in 2000, and ruined his shop and his house, he had to start over. The result was Bill’s Produce Store and Café in 2001. With the help of Michelin-experienced chef Andy Pellegrino, they developed the menu. The rest, as they say, is history.

Hummus Bros claims to the first eatery in the UK where hummus is used as a base for the main course. Whether it is the first or not, it’s certainly the most successful so far. With four branches in London and a track record in pop-up events, there are two to four new branches on the cards over the next 18 months.

It was created by Cambridge University graduates Christian Mouysset and Ronen Givon in 2005 who spotted a gap for healthy fast food during their studies. They’ve used equity crowdfunding site Seedrs to expand their outlets, raising over £300,000, exceeding their £250,000 target.

Christian says: “I think our concept is successful and expanding because we provide healthy Mediterranean food at a very reasonable price. We also cater to most food intolerances including gluten and lactose which are becoming a lot more common.”

Its appeal also lies in its commitment to fresh produce, with hummus and spreads made on-site every day. Bestsellers include the hummus with chicken or guacamole topping, tabbouleh, Greek salads and their fresh mint and ginger lemonade. For eat-in diners, there are communal bench tables.

A passion for Indian and Mexico food is the inspiration behind Wrapchic, which now has eight outlets in London, Birmingham, Southampton, Leicester, Coventry and Derby, serving the lunchtime and early evening dinner crowd.

This Birmingham-based Indian burrito chain was founded by Mahesh Raikar, who left his job at a Fortune 500 company to create Wrapchic – The Indian Burrito Company. It started with a stall in July 2012 in Birmingham’s city centre and plans to double its outlets over the next year or so.

Part of its appeal lies in the British love for Indian food – but not everyone fancies a curry at lunchtime or after work. Instead, Wrapchic serves Mexican-inspired wraps, burritos, tacos and ‘bowls’, but with Indian-inspired fillings such as paneer masala, fish malabari and chicken muglai. Accompanying them are sides such as toasted breaded samosas, Indian spiced chicken wings and refreshing lassi yogurt drinks.

Mexican food is enjoying something of a renaissance, thanks to street food restaurants like Wahaca and Barburrito. The latter is the UK’s first burrito bar chain and was launched by founder and CEO Morgan Davies in Manchester in 2005. It’s also the first burrito chain to go national with 12 stores across Liverpool, Leeds, Nottingham, London and its latest on 26 June 2015 in Cardiff’s St David’s Centre.

Plans are to have over 20 stores in the next two years, the target locations being city centres, shopping centres and travel hubs.

Dishes are made in front of customers and they pride themselves on flavour. The grilled chicken and steak are marinated for over 24 hours in a secret Barburrito spice mix, guacamole is made fresh in store daily and their Pinto and black beans are slow-cooked for two hours with lots of spices with cumin, onions and tomatoes. No preservatives are added on the basis that fresh food doesn’t need preserving, just eating.

How to get the best seat in a restaurant