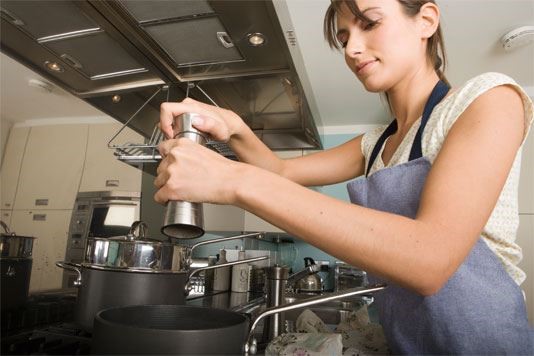 We ask chefs, cooks and spice merchants for their advice, best buys and tips on how to use salt and pepper to make your cooking shine like a pro's.

Salt and pepper: what a double act. The yin and yang of gastronomy, the Chas and Dave of the kitchen. On the one side the hot, fruity, spicy darkness of pepper; on the other the dry, bright bite of salt. We'd be royally stuffed in culinary matters were it not for salt and pepper.

This dynamic duo is on or in nearly every dish we eat, but rarely does it get star billing.

Yet on holiday in the South of France, I had a dish in which salt and pepper played a key part. The classic café meal of the region is duck and chips. The duck breast was cooked rare, and heavily seasoned with coarse ground black pepper.

The chips, meanwhile, wore their shiny white crystals of salt like Liberace wore diamonds. Here was a perfect display of the very reason for seasoning. The taste of each ingredient was lifted and thrown into counterpoint by the addition of salt and pepper, making a dish greater than the sum of its parts.

Other dishes that use both salt and pepper as the main flavouring include salt and pepper squid, where salt is paired with punchy Sichuan peppercorns to give the light batter surrounding the squid a real kick.

Aside from this and a few others (including the ubiquitous Margarita cocktail), salt and pepper's main job in the kitchen is seasoning.

Chef Grant Hawthorne agrees: "One of the things we are trained in as chefs is the ability to season properly. As a chef it is something that is hugely overlooked at the best of times. Bland food is a result of not seasoning properly. We're trained with a mantra: taste, taste and taste again.

"There is another seasoning oddity: overly salted food means the chef is in love. Quite often you'll find the chef cooking the dish has met a new partner and tends to over season his/her food. Uncomfortable when having to deal with complaints."

One of the best things you can do to improve your cooking is buy some good quality salt. Plain table salt is fine added to boiling water when cooking pasta, potatoes and rice, as these foods will absorb the salty water which will improve the flavour.

There's the old line that water to cook pasta in should be as salty as the Mediterranean, so we're talking a good amount here, not a tiny pinch. As for boiling other things like vegetables, adding salt to the water is a complete waste of time according to scientist Peter Barham.

For the table, however, we'd recommend some proper sea salt (here's a list of some of our favourite producers). In the past salt was crucial for the preservation of food, so that saline smack of bacon or lip-puckering tang of kippers is all thanks to salt.

Chef Maunika Gowardhan uses a range of different peppers depending on the dish in question.

Sichuan (also know as triphal or teppal) pepper adds heat; tellicherry peppercorns from India are left on the vine longer so they develop a deep, rich flavour; and she occasionally uses java long pepper.

Long pepper is interesting as it's often the pepper of choice in sweet recipes, for example poaching pears or even making ‘long pepper cream’. If you really want a 'world tour' of peppers, souschef.co.uk do a world pepper kit, which includes four different types of pepper and all-important tasting notes.

Here are a few final thoughts: firstly, why is it always 'salt and pepper', never 'pepper and salt'? I once knew a Swedish girl who worked in a café and said it the wrong way round which utterly confused most customers. Secondly, why do we put salt, but never pepper, on fish and chips?

If you know the answer, or want to tell us about your salt and pepper habits, leave a comment below.

Is flavoured salt the next big thing?

How to cook on salt blocks