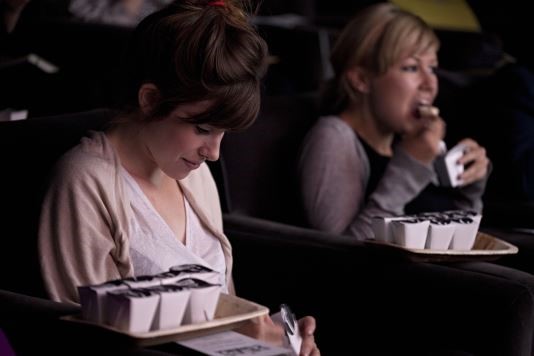 Fancy a different kind of dinner? Here are nine places where the food is only part of the story.

You could say it began with Punchdrunk, whose pioneering immersive theatre experiences had audiences roaming between different locations to experience theatre in a whole new way, while Secret Cinema did something similar with films. Now it's happening with food.

Take blind dining at London’s well-liked Dans Le Noir, for instance, where diners eat in the dark for a heightened sensory experience, and are served by blind waiters.

The age of immersive, interactive, inventive dining is well upon us. Here are nine more fantastically unusual eating out experiences.

Founders Susannah Mountfort and Kerry Adamson work with designers to create ‘multi-dimensional’ dining events. If you’re wondering what that means, let me explain what they were up to during a six-week run dubbed The Secret Island.

Diners were transported through five ‘dimensions’ of Singapore – think tropical jungle, hawkers’ market and traditional houses – accompanied by a multi-course menu. Previous events saw guests ‘initiated’ into a Secret Order in an east London chapel and dining in a Shoreditch submarine.

Their current project, The Chambers of Flavour, described as ‘part-flavour laboratory; part-parallel reality vortex’, is a five-course meal (£50-£65) across five settings at a secret east London location.

It’s less about gourmet and more about the laughs, with events at different UK venues (from £46) and globally, plus five shows a week at London’s Amba Hotel (from £52). Their other venture is The Wedding Reception where four actors play nine characters in a two-hour interactive, improvised comedy set; a three-course meal cost £39.

“It is, essentially, Satan's dinner party,” said online magazine Shut Up and Sit Down of this 32-course dinner (yes, that’s why it’s £100 a pop with drinks). Forty-eight people are randomly sat at a long table with fancy food at the top end and terrible food at the bottom end.

Diners change their fortune by playing Prisoner’s Dilemma – each person receives a small token, one side features a goblet of trust, the other a knife for betrayal. If both reveal goblets, they move up five seats.

If only one of the pair shows a knife, that person moves up 10, the other shifts down 10. If both reveal knives, both drop five seats. Goblet may be win-win, but that’s not how human minds work. Check the website for upcoming events.

In April, the theme was Belle Époque with their Underground Paris project (pictured above). Transforming Elixir Tonics & Treats bar into a drinking den reminiscent of Oscar Wilde and Vincent Van Gogh’s haunts, they served a five-course French menu with absinthe-based cocktails, wines from guest sommeliers and entertainment. Bohemians rejoiced with a dress code of feathers and furs, big hats and hair, top hats and fine lace.

The Art of Dining

National Trust properties, warehouses and community halls are among the venues for this collaboration between Moro-trained chef Ellen Parr and artist/set designer Alice Hodge who at university conjured up feasts from the contents of an M&S skip.

Past events include: Gone Camping, recreating a countryside campsite in east London with marshmallow-toasting and campfires; 70s-themed Abigail’s Party; and a peasant food-inspired Servants’ Supper at the National Trust’s Ham House (£55 five-course meal and drink).

Current projects are for private groups: Forest Feast in an enchanted forest in Hackney, and The Office Christmas Party is an 80s-themed food, music and theatre experience.

At inamo, which has Asian fusion restaurants and bars in Soho and St James, the star is the interactive ordering system.

Food and drink menus are projected onto the table, and diners can set the mood, choose a virtual tablecloth, play games and see chefs working in the kitchen via the 'Chef Cam' function.

Their most recent venture was Charlie and the Chocolate Factory in collaboration with Science Museum Lates. Cinema-goers pay £37 to watch Johnny Depp and co on the giant IMAX screen, with a sweet-and-savoury menu including a gum that tastes like a three-course dinner (remember Violet Beauregarde?) and Augustus-flavoured chocolate-covered gloop.

It was dreamt up at a meeting between Soho House and unusual events specialists Teatime Production who work with mixologists, food designers and experimental chefs.

For a ‘cushty’ night with a ‘plonker’ or two, the Only Fools and 3 Courses interactive comedy dinner show is just the ticket. Based around a gala dinner hosted by Marlene and Boycie, plans are bound to get scuppered with Del Boy, Rodney and Uncle Albert on the guest list – although no doubt a ‘lovely jubbly’ night awaits.

Comedy Dining run other themed comedy meals including Addams Family, Ab Fab, ‘Allo ‘Allo and Blackadder at venues across the UK, such as theatres, hotels, restaurants and town halls.

Based in Bristol, this immersive theatre company combines interactive theatre with fine dining. Diners become the audience and part of the story at events in car parks, churches, galleries and even swimming pools.

Past events include: Alice in Wonderland, where diners ate White Rabbit Pie, sat at The Red Queen’s table, played cards with the Mad Hatter and had a food fight; and Jack Rabbit’s Derby, where a multi-storey car park turned into a 1950s set with Cadillacs, cola cocktail shakes, roller-skating waitresses and swing dancing.

Blind dining: just how difficult is it?