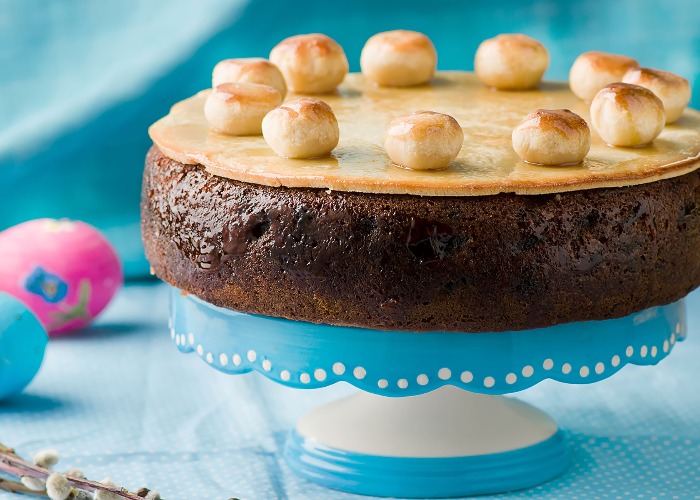 We delve into the mysterious history of simnel cake, as well as its symbolism and ties to the Easter table

Fruitcake has a famous association with Christmas but less well known – and equally delicious - is its Easter version, the simnel cake. Lighter, sweeter and steeped in symbolism, this springtime bake is also one of the UK's most mysterious traditional treats.

As food historian Dr Annie Gray puts it: “Simnel cake is the stuff of legends, most of them entirely unfounded in reality.” So what is the true story of the simnel? Let’s find out…

What is simnel cake?

The simnel cake you’ll eat today is a light and almondy fruitcake made from white flour, sugar, butter, eggs, spices, dried fruit, zest and candied peel. It has a layer of marzipan or almond paste baked into the middle, and orange flower water or brandy may be added to either the cake batter or the filling.

What distinguishes it from other cakes is the decoration – another layer of almond paste or marzipan on top and 11 marzipan balls to represent the apostles minus Judas, plus it's toasted under the grill. Edible flowers or Easter elements like toy chicks can be added as a final flourish.

READ MORE: Get our recipe for simnel cake here 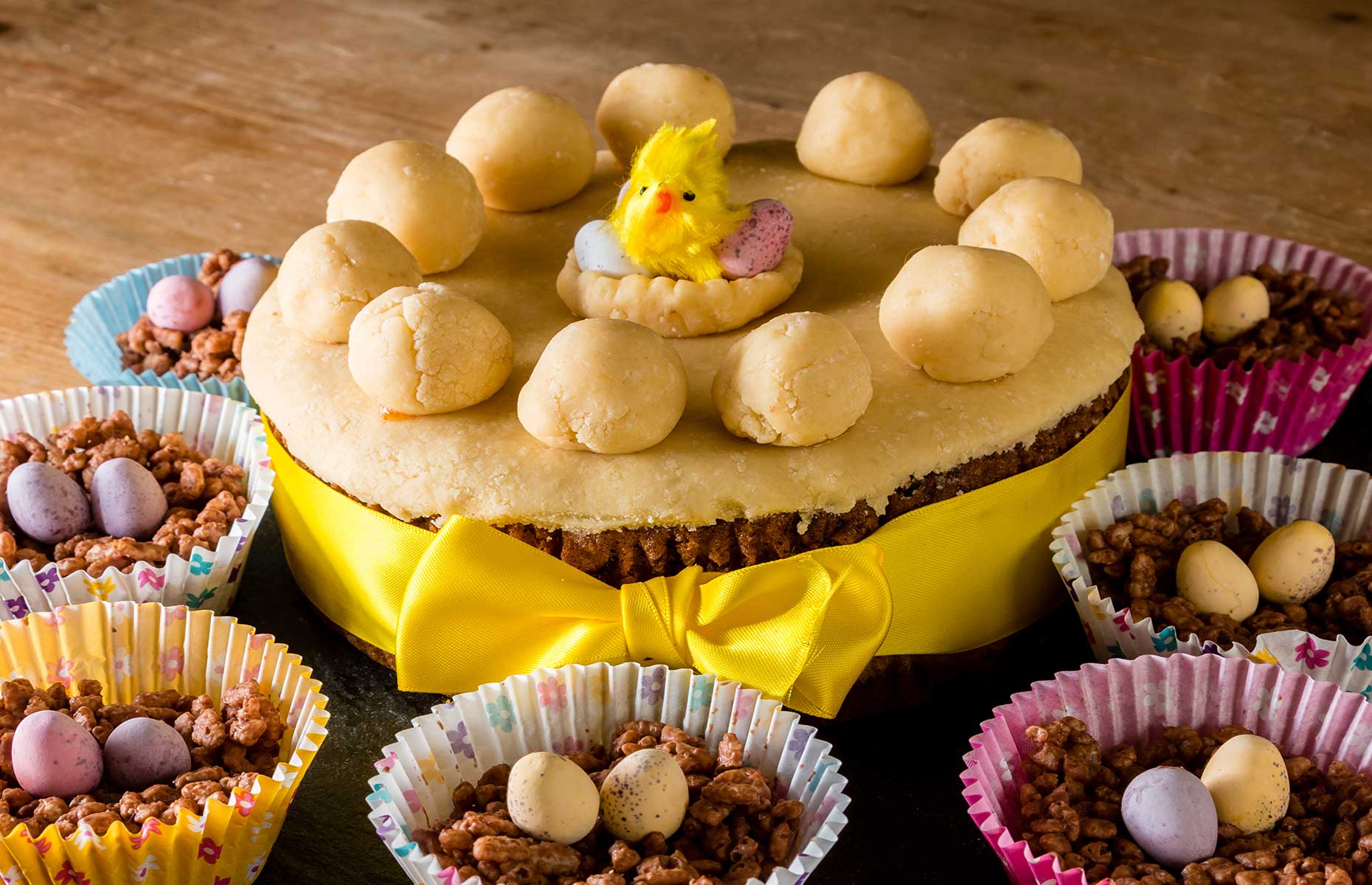 Simnel cake goes back centuries, but the one we eat today is very different to early bakes.

Museum curator Emma Heslewood, who writes The Cake Historian blog, says: “There are other versions of simnel because it was originally a dough fruit bread. All cakes started life as sweet loaves and then evolved into textured cakes, when sugar became more readily available from the plantations. Before that, people might use a bit of honey or fruit.”

The competition to be the home of simnel cake is hotly contested. There are three places that stake a claim and although their recipes are quite different, each one omits milk and butter as these used to be in limited supply during Lent.

The illustration below comes from a 19th-century book. 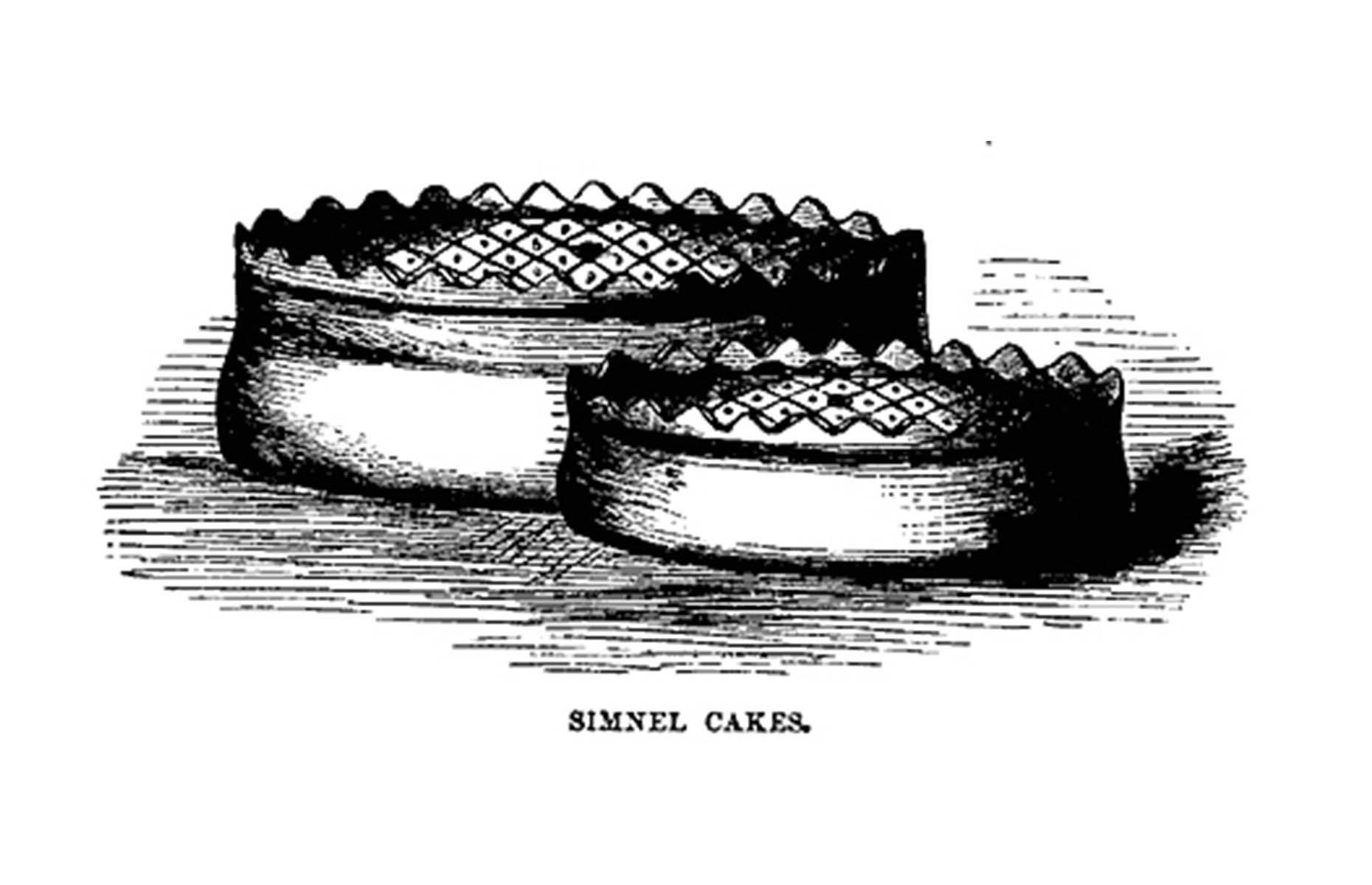 The first is Shrewsbury simnel, a rich plum cake covered in a crust made from flour, saffron and water, giving it a distinctive yellow colour. It was boiled for several hours in a bag, like a Christmas pudding, then brushed with egg and baked, producing a solid and long-lasting result.

Heslewood says: “Shrewsbury is the first recorded one but it could have been from anywhere really, as everyone made their own sweet breads and cakes.”

The second type is Devizes star simnel, a star-shaped cake made with currants and lemon peel, coloured golden with saffron, then boiled, baked and glazed. The Wiltshire Heritage Museum has an original recipe of the local version.

The third is from the Lancashire town of Bury and is closest to the simnel eaten today. It’s made with nuts, cherries and peel, iced with marzipan and decorated with sugar balls. The town proudly promoted their cake in the 19th century, even presenting a 32kg (70lb) simnel to Queen Victoria in 1863, which may be why it has become most common.

What does 'simnel' mean?

There are some weird and wonderful theories about the moniker of this cake. One of the most humorous is a 19th-century tale about an old couple called Simon and Nell.

Legend has it that they decided to use leftover ingredients from Christmas to make a cake for spring. But they argued over what to do with the dough – Simon wanted to boil it and Nell wanted to bake it. They compromised by doing both, with their invention becoming known as a Sim-Nell.

It's also been suggested that the cake is named after Lambert Simnel, a claimant to the throne in Henry VII’s time. Victorian novelist Elizabeth Gaskell referenced this highly unlikely theory in a letter to a friend in 1838, when she shared her childhood recollections of eating simnel cake on Mothering Sunday in Knutsford, Cheshire.

READ MORE: Take a look at food and drink named after real people 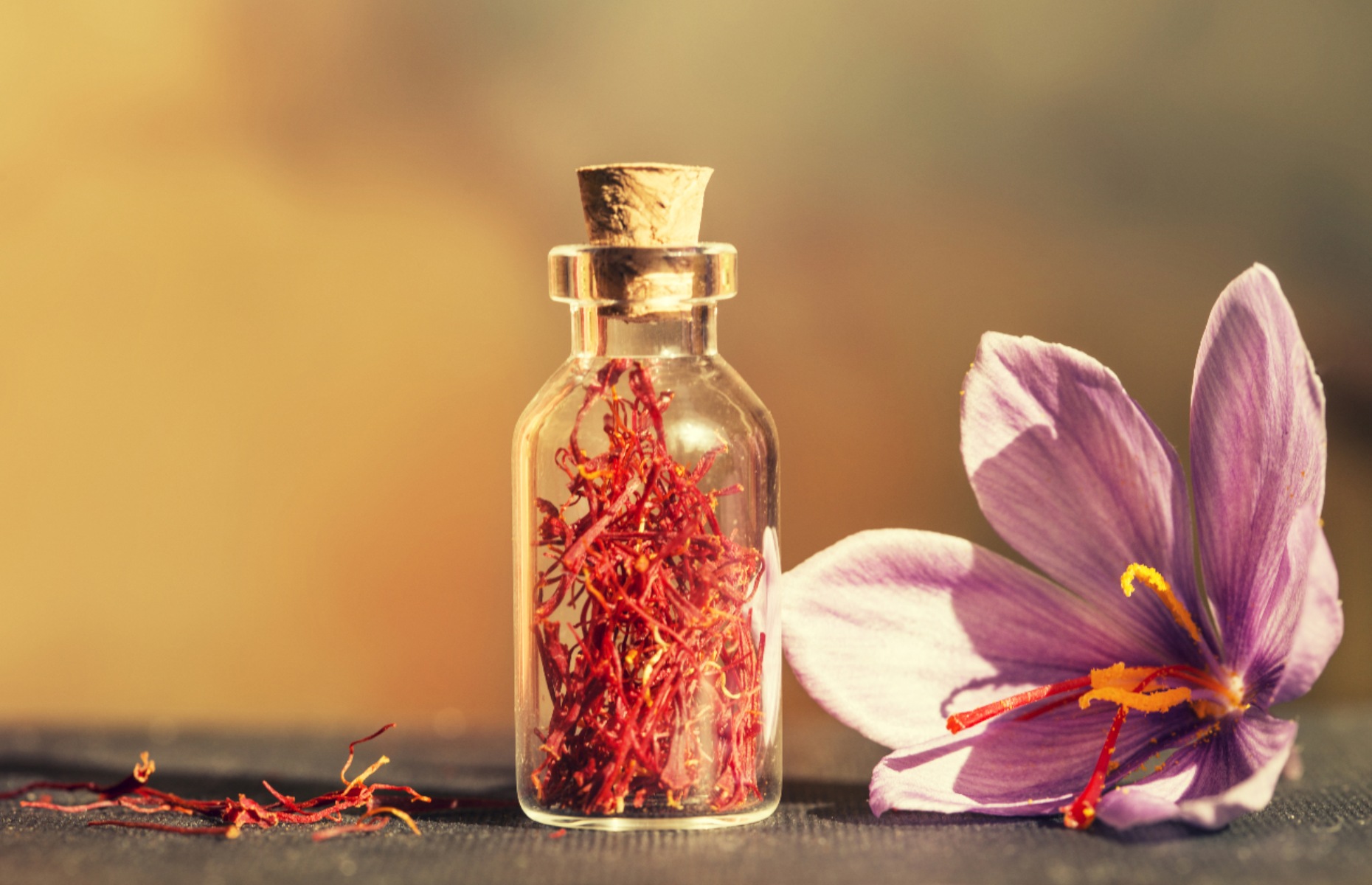 She wrote: “A cake made variously, but always with saffron for its principal ingredient. This I should fancy was a relic of Papistry, but I wonder how it originated. Lambert Simnel, the imposter in Henry the Seventh’s time, was a baker’s son, I think. The shop windows are filled with them, high and low eat them.”

The truth is actually far more pedestrian. Simnel probably comes from the Latin word ‘simila’, meaning fine wheat flour. The cake’s forefather of simnel bread was on the British menu as far back as the 11th century.

How did it become Easter simnel cake?

Simnel is mostly eaten in the UK as well as countries that have Christian populations descended from British and Irish immigrants. It was originally associated with feast days in Lent, including the fourth Sunday (known as Laetare Sunday), which also coincides with Mothering Sunday.

Today we regard Mother’s Day as a celebration of mums but in Tudor times, this was a rare day off for servants to visit their ‘mother’ church if they could, taking cakes and flowers as a gift.

Food historian Pen Vogler, author of Scoff: A History of Food and Class in Britain (£9.99, Atlantic Books), says simnel cake would be made for the occasion as it was a welcome respite from fasting. She notes that poet Robert Herrick wrote in 1648, "I’ll to thee a simnel bring, Gainst though go’st a mothering." 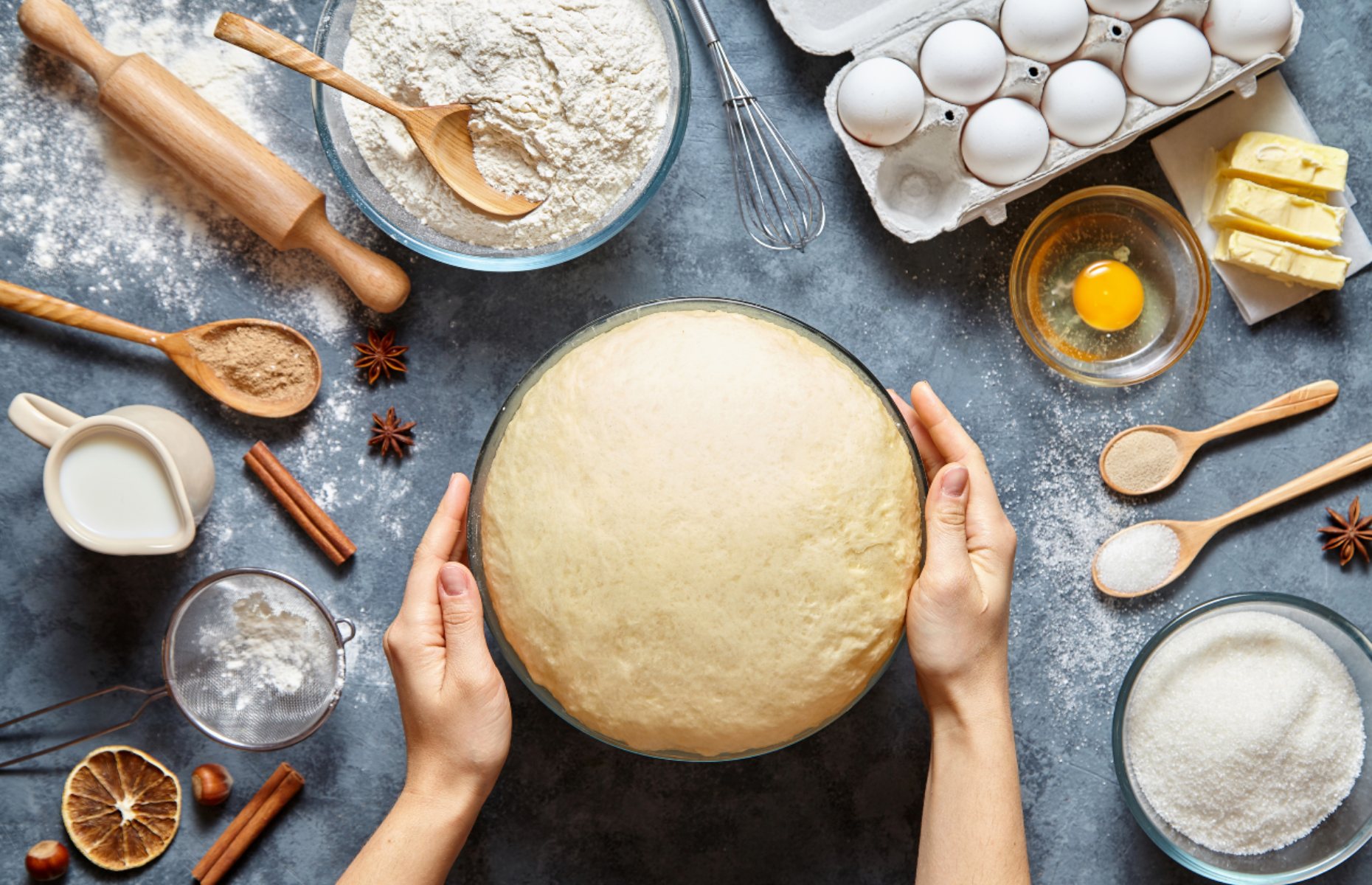 However, Dr Annie Gray, a panellist on Radio 4’s The Kitchen Cabinet and author of The Official Downton Abbey Cookbook (£18.39, Weldon Owen 2019), believes much of the symbolism around simnel cake is mythology, tracing it back to the Victorians who liked to tell “tall stories”. She thinks the Mother’s Day connection is fairly modern, while marzipan balls only came into fashion in the 1970s, after briefly appearing in the Edwardian era.

Heslewood agrees that the Victorians had a big hand in fixing the ‘cake calendar’. She says: “The 19th century was the height of cake eating, where the recipes were more formally established, like with Mrs Beeton, and cakes became traditional with the calendar.”

What is the truth?

Nobody knows – but what we can say is that simnel cake tastes and looks delightful. It might not be as popular as it once was, but with brands like Bettys and Marks & Spencer stocking the seasonal favourite, the cake could win hearts once more.

Heslewood says: “Perhaps the decline is because people do not celebrate Easter as much or favour chocolate eggs instead. Fruitcakes have also declined in popularity because of the rise of American-style cakes."

“But simnel cake is a really beautiful cake that makes a wonderful centrepiece for your Easter celebrations.” 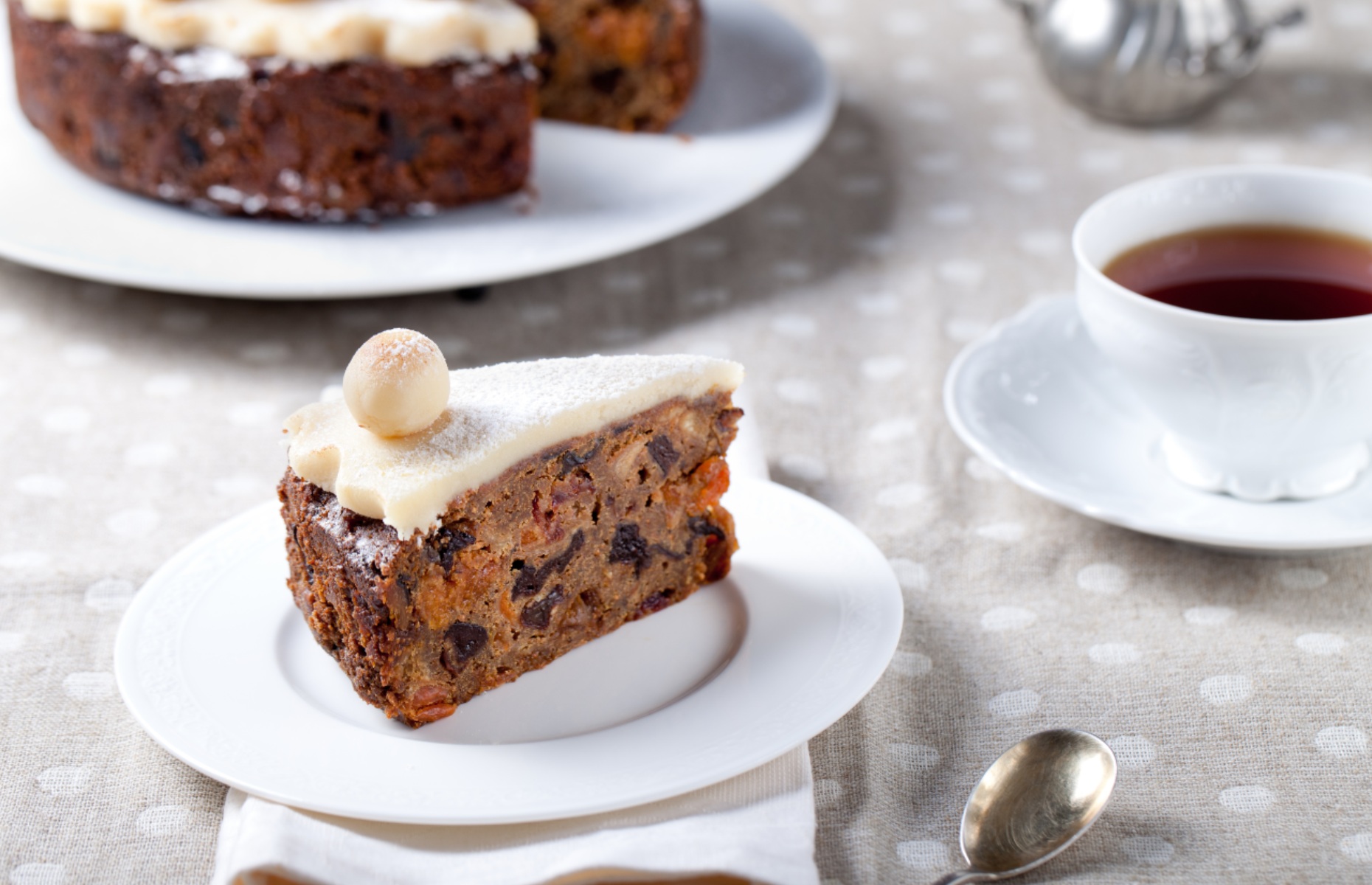