These are the most shocking eating contests around the world

Facebook
Some people will go to shocking lengths for a moment of foodie glory. From crunching insects to guzzling down garlic, these are some of the most famous and bizarre eating competitions around the world. Only those with a strong stomach need apply.

Newent Onion Fayre
Just the thought of a raw onion eating contest is enough to bring tears to our eyes. The annual competition is part of the Newent Onion Fayre in the UK. The current record holder is Phil Bullock, who managed to eat an eye-watering 7oz onion in just in 1 minute 6 seconds in 2012.

Shutterstock
One of the most unappetizing foods on this list, balut are hard-boiled fertilized ducks eggs with a half-developed embryo inside. Current champion Wayne Algenio swallowed 40 in five minutes to win the competition, held during the Hester Street Fair in New York City.

Facebook
The World Nettle Eating Championships in Dorset, UK, began in 1997 after a local farmer lost a bet over who had the longest nettles. Now competitors have an hour to chomp their way through as many leaves as they can. 2016 winner Phil Thorne told the Daily Mirror: “It doesn’t hurt as much as you might think, you just get a tingling around your mouth.”

Shutterstock
In June 2017, ‘Bug-Eating King’ (known only by his surname, Peng) chomped his way through 2.7lbs of fried locusts, dragonflies, silkworm pupa and bamboo worms at an insect-eating contest in Lijiang, China. Not only did he win the coveted title, but he was also awarded a 24-carat gold medal.

Shutterstock
As Elvis Presley was such a fan of peanut butter and banana sandwiches, this Mississippi event was held during his birthday weekend in 2011. Professional competitive eater Patrick 'Deep Dish' Bertoletti scooped the $1,500 first place prize after devouring an impressive 28 PB&B sandwiches in 10 minutes. 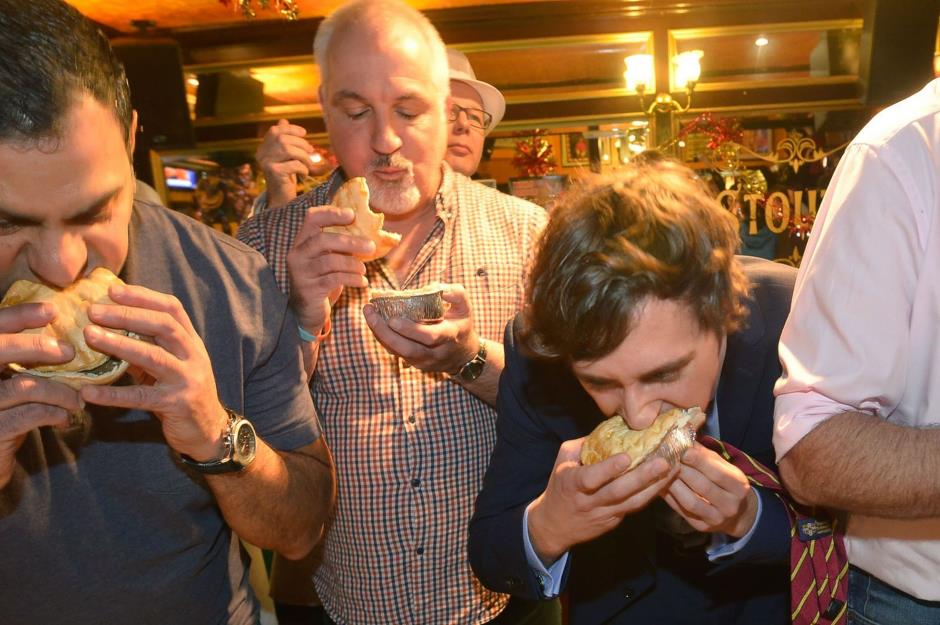 harrysbarwigan.com
The World Pie Eating Championships have been hosted by Harry’s Bar in Wigan for more than 20 years. Last year, Martin Appleton-Clare scoffed a meat and potato pie in just 45.5 seconds to win the contest for the third year in row. 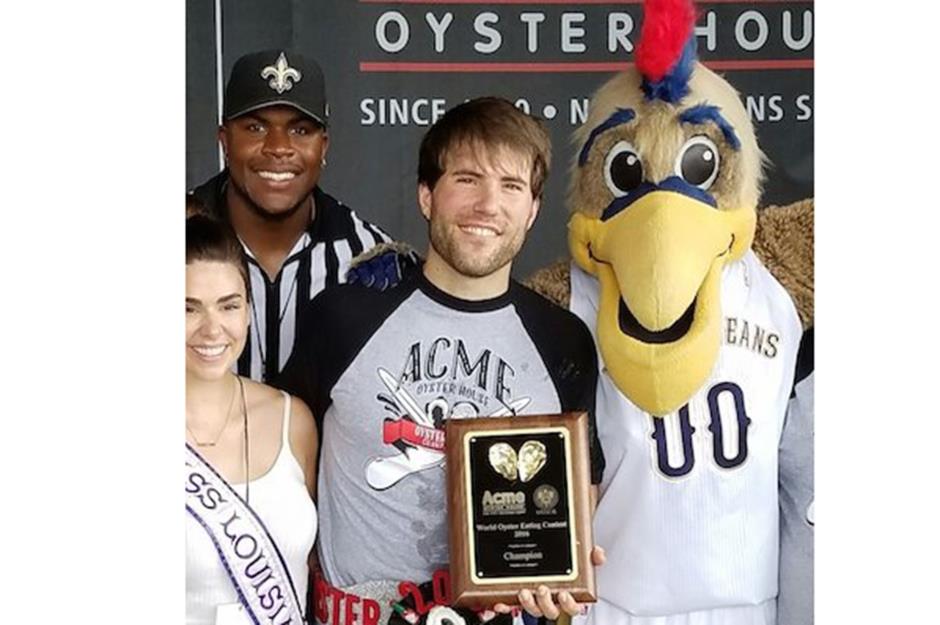 Twitter
The Oyster Eating World Championship record is held by Adrian ‘The Rabbit’ Morgan who managed 528 oysters in 8 minutes in 2016. After his win he revealed swallowing the slippery molluscs is only part of the challenge: "The thing with oysters is they go down really easy. The trouble is keeping them down. They come up easy, so it takes mental fortitude." The annual event is held in New Orleans, Louisiana.

Facebook
The gut-busting record at The World Slugburger Eating Championship in Mississippi is held by Matt Stone, who chewed his way through an incredible 43 burgers in 10 minutes during the 2014 contest. Given the other bizarre competitions on this list, you’d be forgiven for thinking these burgers contain real slugs. Thankfully, they’re actually made with deep-fried beef, onions, pickles and mustard.

Kismot.co.uk
The Killer Kismot curry is so spicy competitors must sign a legal disclaimer before attempting to eat it. Cooked up by the Kismot curry house in Edinburgh, Scotland, the dish contains five of the world’s hottest chilis. In 2011, two competitors became so unwell after eating three bowls they were rushed to hospital by ambulance soon after. 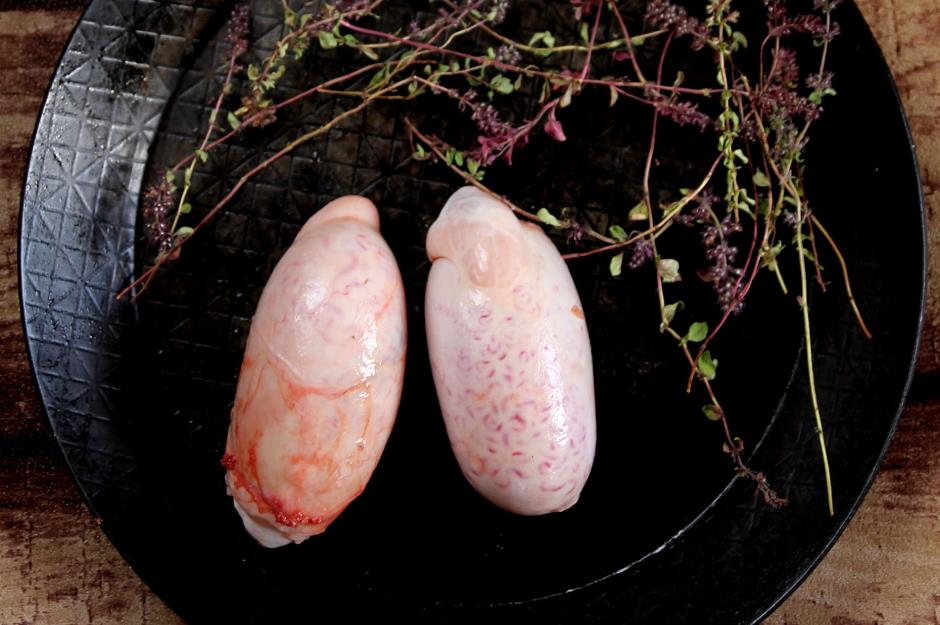 Pixabay
Speed-eating fried bull’s testicles is a popular part of the annual Testicle Festival, held across Illinois, Montana or Michigan. Competitors have four minutes to eat as many of the delicacies, also known as Rocky Mountain Oysters, as they can.

Shutterstock
Competitors at the annual Crocodile Egg Eating Contest, held at Pattaya Crocodile Farm, Thailand, must eat 10 eggs as quickly as they can. Crucially, cleanliness is rewarded. In 2010 Khun Udom Butgnam who finished first in 4 minutes 37 seconds was knocked back to third position for after some of his points were deducted for being a messy eater.

Facebook
Hungry competitors will need to munch their way through more than 11.5lbs of breaded fried mushrooms in 8 minutes to break the current world record, set in 2014. The Fried Mushroom Eating Championships, Pennsylvania, have been attracting crowds and contestants since 2011.

Shutterstock
For many people, chomping through just one super-spicy jalapeño pepper would be challenge enough. But, Alfredo Hernandes managed to consume 16 in one in minute at the La Costeña Feel the Heat Challenge in 2006. He still holds the Guinness World Record for the most eaten in 60 seconds. 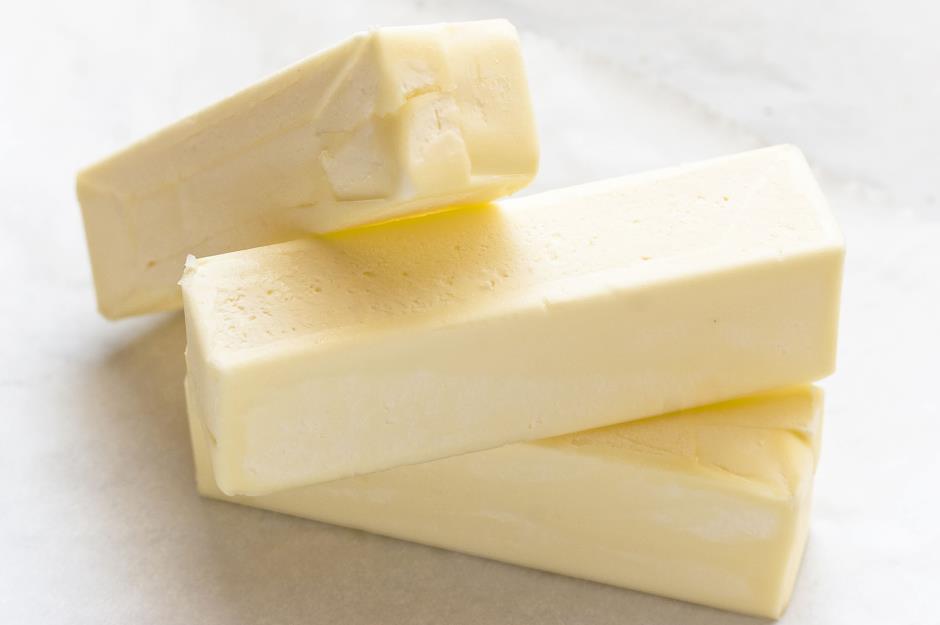 Shutterstock
It doesn’t get much more unhealthy than this. Don Lerman holds the current record after scoffing seven sticks of salted butter, totalling 1.75lb, in five minutes during the 2001 contest. The competition is part of the televised Glutton Bowl, a two-hour eating special broadcast on Fox News.

Facebook
Joey Chestnut broke his own record at the World Deep Fried Asparagus Eating Competition, California, in 2011. He managed to scoff 12lbs 8.75oz of the battered vegetables in 10 minutes. He’d already won the contest several times before.

Shutterstock
Plum dumplings are very popular in the Czech Republic and several eating competitions are held across the country each year. Entrants have an hour to chomp their way through as many of these sweet desserts as they can. The current record is 191 pieces. 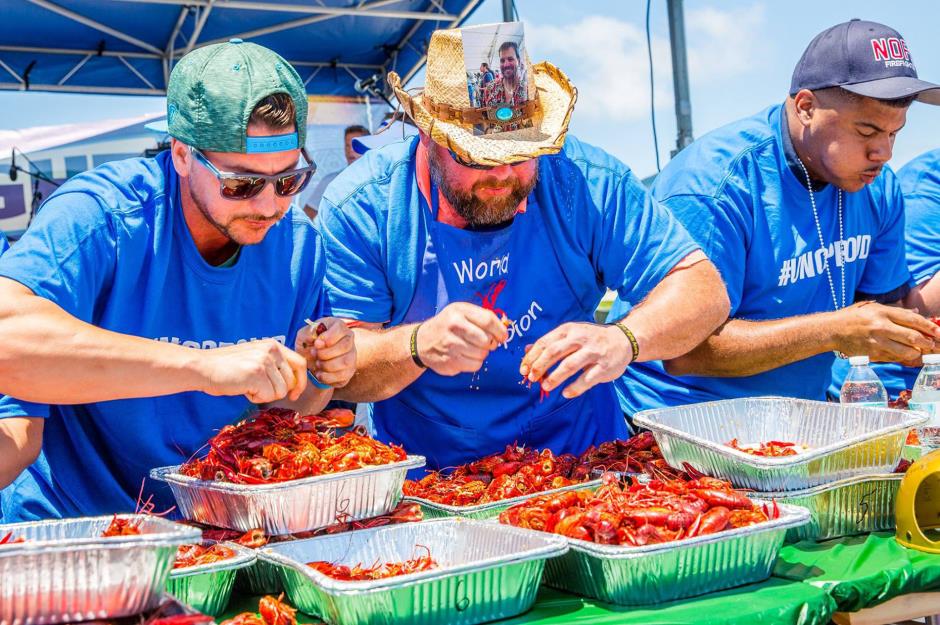 Facebook
During last year’s Crawfish Mambo Festival in New Orleans, Louisiana, winner Russell Callais devoured 2.6lbs of the meat in 10 minutes. To add to the pressure, all competitors must remove the meat from it's shell before eating.

Thepubchiangmai.com
They hail from the north of England but Yorkshire puddings are loved around the world. They’re especially popular in Chaing Mai, Thailand, where a one local bar ‘The Pub’ holds the annual Yorkshire Pudding Eating Competition. The current record stands at 37 in one hour.

Many love it, others loathe it, but few of us could stomach eating four bowls of mayonnaise in eight minutes. That’s how much current record holder Oleg Zhornitskiy wolfed down when he ate 7.9lb of the thick, creamy condiment. The competition is also part of Fox News's Glutton Bowl extravaganza.