The secrets to potato perfection

Olexiy Bayev/Shutterstock
When done right, potatoes are the single most delicious food on the planet. These hints, tips and cheats will make peeling, preparing and cooking potatoes a whole lot easier – and a whole lot tastier.

Elena Shashkina/Shutterstock
Different potato varieties should be used for different dishes. Floury or starchy potatoes (such as Russet and King Edward) work well for mashing and baking. They have a soft, dry texture when cooked and are not suitable for just boiling as they disintegrate. 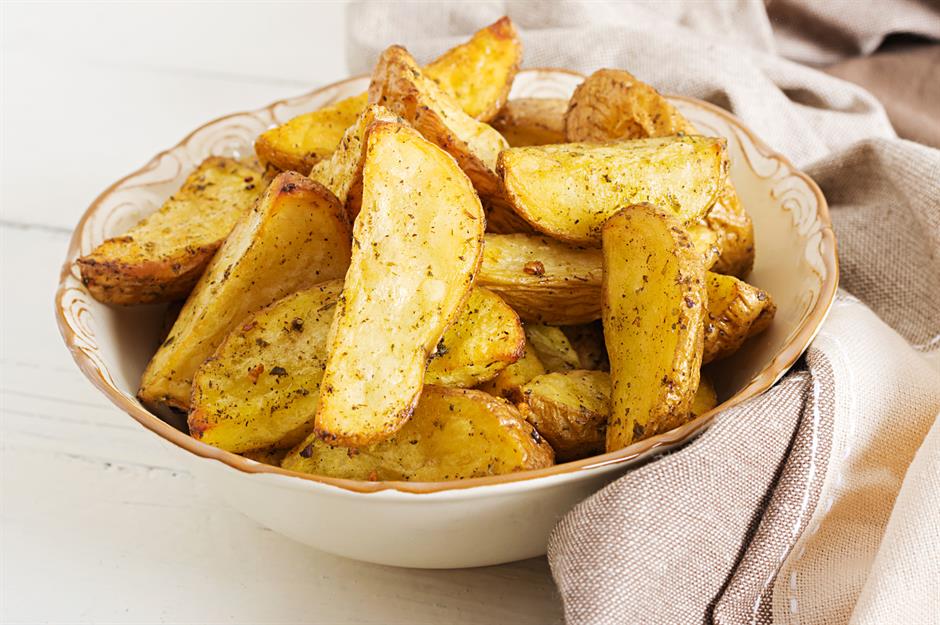 Timolina/Shutterstock
All-purpose potatoes are somewhere between floury and waxy in terms of starchiness. Maris Piper, Yukon Gold, and blue and purple potatoes are good all-rounders. Grab a bag of these for roasting, mashing, baking and making chips.

Kristi Blokhin/Shutterstock
Potatoes are best kept in a cool, dry and dark place such as a pantry or cupboard, or in a paper or hessian bag away from heat sources. They do not fare well in the fridge – the cold can affect the flavour as well as lead to dampness and spoilage.

SPb photo maker/Shutterstock
Make sure you store potatoes in a separate place to your onions. Both potatoes and onions release moisture and gases that will cause the other to spoil faster, so it's best to keep them apart.

Invest in a good peeler

Shutterstock/Bilanol
Potato peelers can be fiddly at best and time-consuming at worst, so it's worth investing in a good one. Y-peelers (pictured) are the best and generally the safest.

Mirko Graul/Shutterstock
When boiling potatoes, always place them in cold water with a sprinkling of salt and then bring up to a boil. This helps them to cook evenly. If you place them in boiling water, the outside of the potato can cook before the heat reaches the inside. 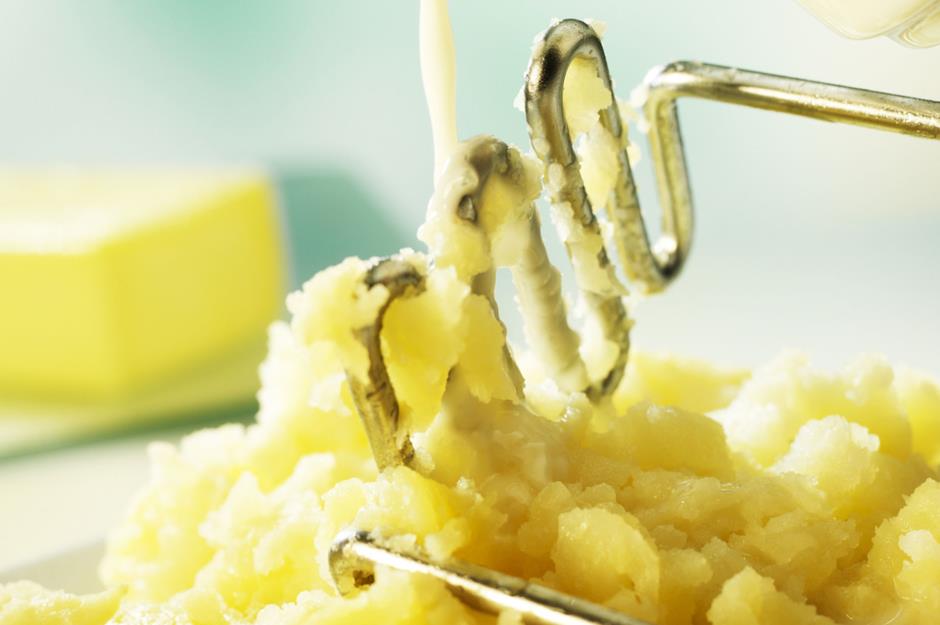 Phil Lenoir/Shutterstock
After bringing to the boil in salted water, simmer peeled potatoes until tender (around 20 minutes), drain well and – this is key – mash with a hand masher. Tempting as it is to use an electric device, doing so can overwork the mash which results in a gluey finish. Add room temperature butter, milk and seasoning after a good mashing to remove lumps. Finish with a short, vigorous whisk to blend in the dairy. 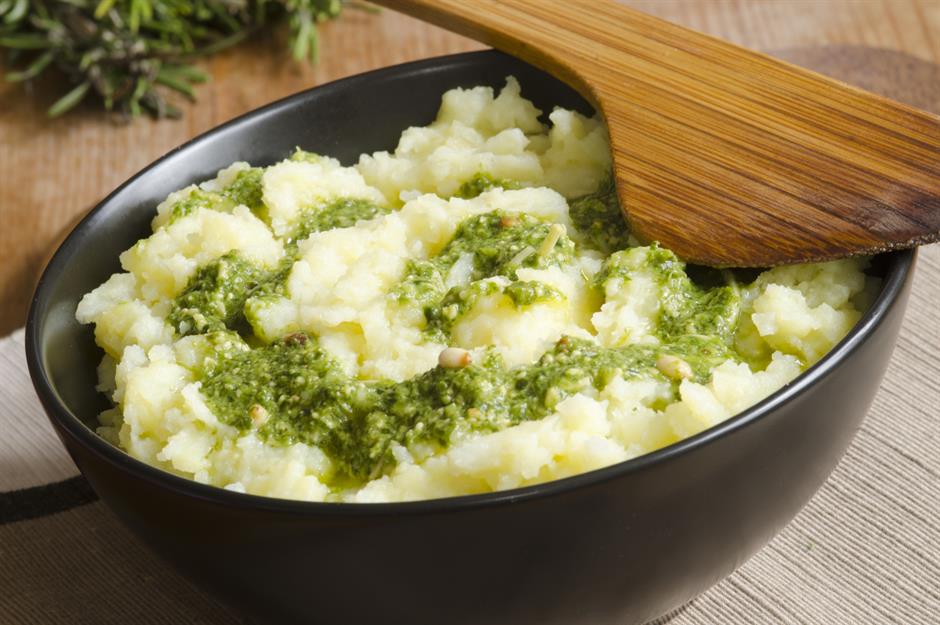 Mash doesn't need to be simple. You could stir through pesto for an Italian twist or add cream, spring onions, parsley and thyme to make this recipe for traditional Irish champ. Take a look at our moreish mashed potato ideas for inspiration.

Did you know that you can make gnocchi from leftover mashed potato in under an hour? Follow this recipe for simple homemade gnocchi with a fresh tomato and basil sauce. Discover more ways to use ingredients you'd usually throw away here.

Have a go at Duchess potatoes 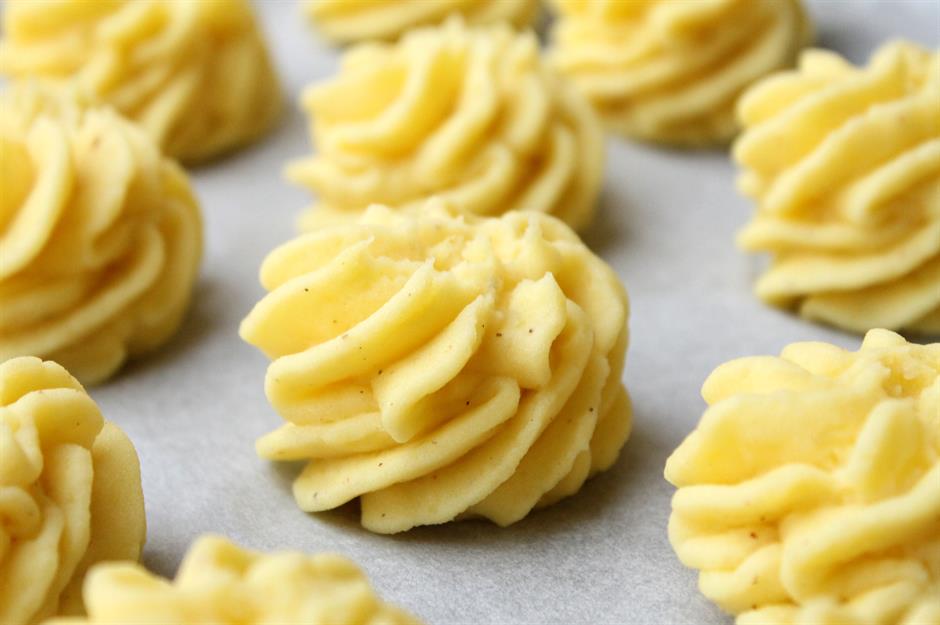 Duchess potatoes are a 1960s classic and we think there's always room at a dinner party for these fancy spuds. Boil or roast Russet potatoes, pass through a ricer, enrich with egg yolk, butter and nutmeg, then pipe onto a baking tray. Stars or spirals make dainty shapes, then bake for 20 minutes or until golden on the outside and soft in the centre. Here are some other retro foods that we think deserve a comeback.

For fluffy-on-the-inside, crispy-on-the-outside baked potatoes, pick a spud with firm skin then wash in cold water, dry and prick with a fork. Rub with olive oil or softened butter, sprinkle with salt and cook for 60–90 minutes at 200°C (395°F) or, for extra crispy skin, 120–150 minutes at 180°C (350°F). Make sure to check out our 27 terrific baked potato topping ideas here.

Save time in the microwave

Africa Studio/Shutterstock
If you’re in a rush, there’s no need to wait an hour or more for a baked potato. Prep the potato then microwave on high for 2–3 minutes (check with a knife to see if it’s softened inside) before rubbing with butter and salt, and placing in a preheated oven for around 20 minutes at 220°C (430°F). You'll get a potato with perfectly crispy skin in a fraction of the time.

Leave the foil off

Karl Allgaeuer/Shutterstock
Don’t use foil in a conventional oven as the potatoes will steam. Foil is best used when the potatoes have direct contact with flames, such as on a barbecue or campfire. Instead, in an oven, place the potatoes on a baking tray to allow the air to circulate so the skins go brown and crisp. Remember: foil should never go in the microwave.

Legat33/Shutterstock
Take your baked potato to the next level by scooping out the middle and mashing it with your favourite ingredients, before returning to the oven to crisp up. To give it a go, remove the potato from the oven when it has nearly finished cooking, slice in half, carefully spoon out some of the potato flesh and mix it with butter, sour cream, cheese, cooked bacon and spring onions. Stuff the mixture back in the potato skin and return halves to the oven until the cheese is melted and golden.

Bake an egg inside

Get some protein with your baked potato by cooking an egg inside. Fifteen minutes before the potatoes are done, remove them from the oven, halve them, make an indent in the flesh and crack an egg inside. Bake for the remaining 15 minutes and you have a hearty lunch. Try this sweet potato recipe with spicy sausage which combines the twice-baked technique and incorporates a baked egg. 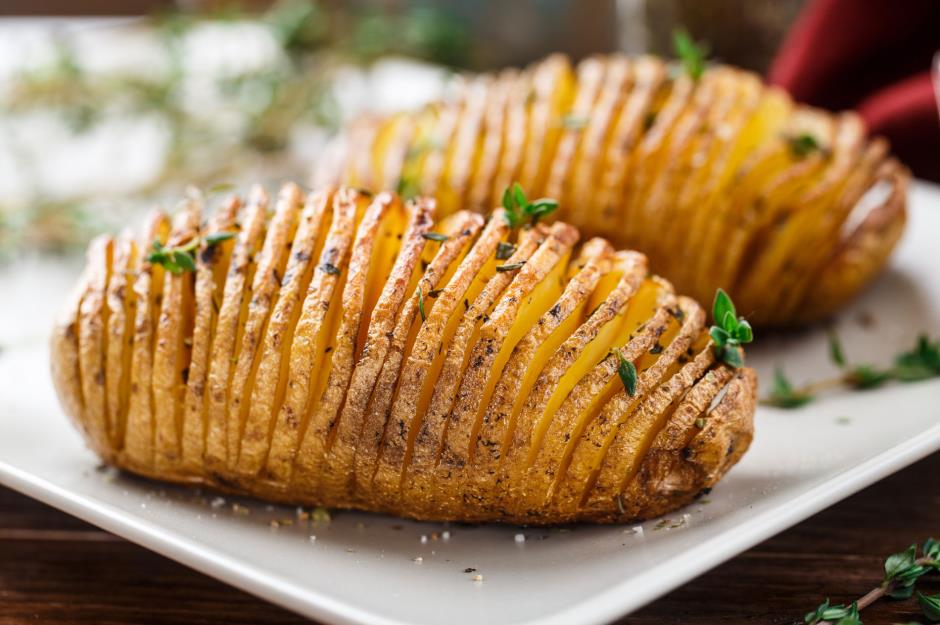 Vankad/Shutterstock
Hasselback baked potatoes look impressive but take little effort to make. Before you put potatoes in the oven, cut a series of small slits three-quarters of the way through the potato then rub with oil or butter. Drizzle with melted butter again once cooked, then sprinkle with chopped fresh parsley before serving. 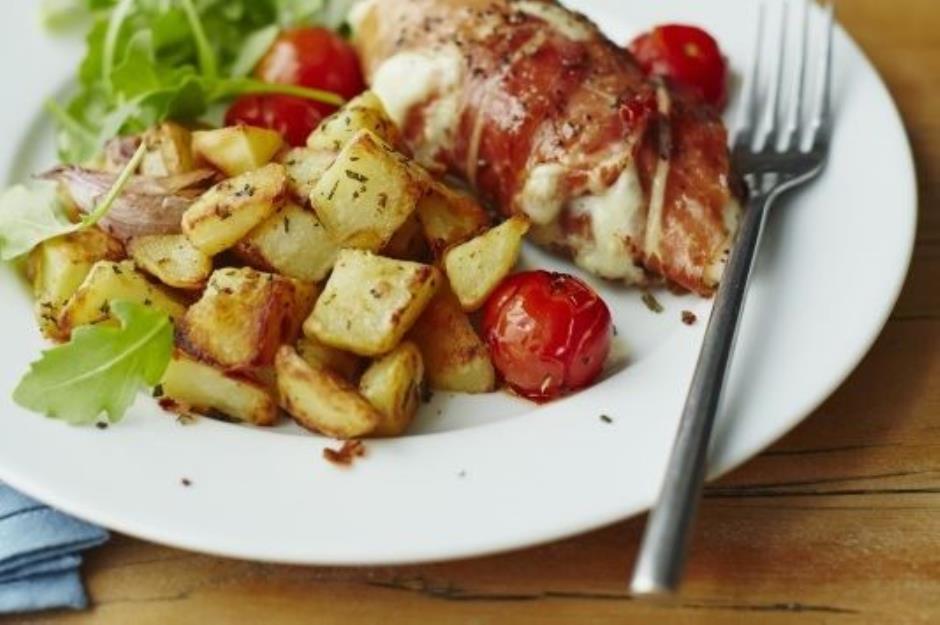 Baking works just as well with cubed potatoes as it does with whole ones. In this recipe for Italian roast chicken with baked potatoes, they're simply tossed in olive oil, garlic and rosemary before being baked for 40 minutes.

There are several secrets to the perfect potato salad. Firstly, don't overcook your potatoes – you want them to remain firm rather than fall apart. Then consider flavours: mayonnaise and chives are a classic combination or try this Scandinavian-style salad with beetroot and radishes. For a lighter, dairy-free version, give this simple recipe with a red wine vinegar and extra virgin olive oil dressing a go. Lastly, serve at room temperature. Few foods are at their best straight from the fridge. Find more potato salad tips here.

Leave the skin on 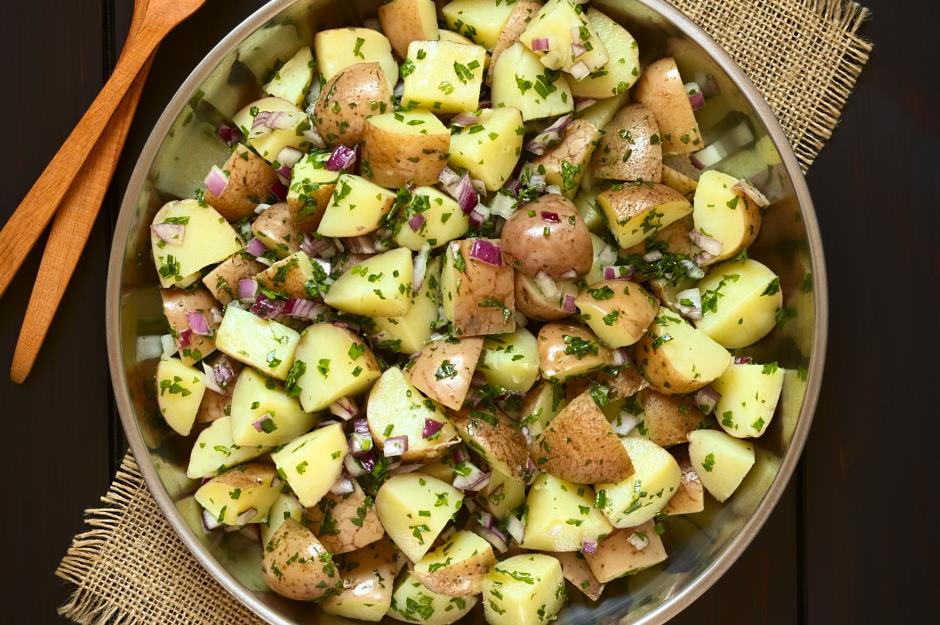 As a general rule, if you're boiling potatoes, it's best to keep the skin on as it’s a good source of fibre and nutrients. New potatoes have particularly thin skins and are delicious simply boiled and crushed with a little butter (try this recipe for crushed new potatoes with salmon).

Elenadesign/Shutterstock
If you prefer your potatoes skinned, don’t discard the peel. Potato skins can be boiled, seasoned and baked for a snack or added to stock for extra flavour.

For perfect roasties, parboil peeled and quartered potatoes (the aim is to soften not cook them), then drain and place in a clean pan. Put on the lid and shake vigorously to fluff up the edges. Do this in batches if necessary. Next, sprinkle with a little plain flour and salt to lightly coat then add the potatoes to a preheated oiled pan for roasting. Find our ultimate crispy roast potato recipe here.

Dmitriy Orlov/Shutterstock
Sautéed potatoes (parboiled and then fried in butter until crisp) work well as an accompaniment to everything from fish to steak. The tip to keeping them golden is to clarify the butter first, removing impurities that can burn and add bitterness. To do this, heat the butter until completely melted then skim off and discard the foam. You'll be left with clear, clarified butter. 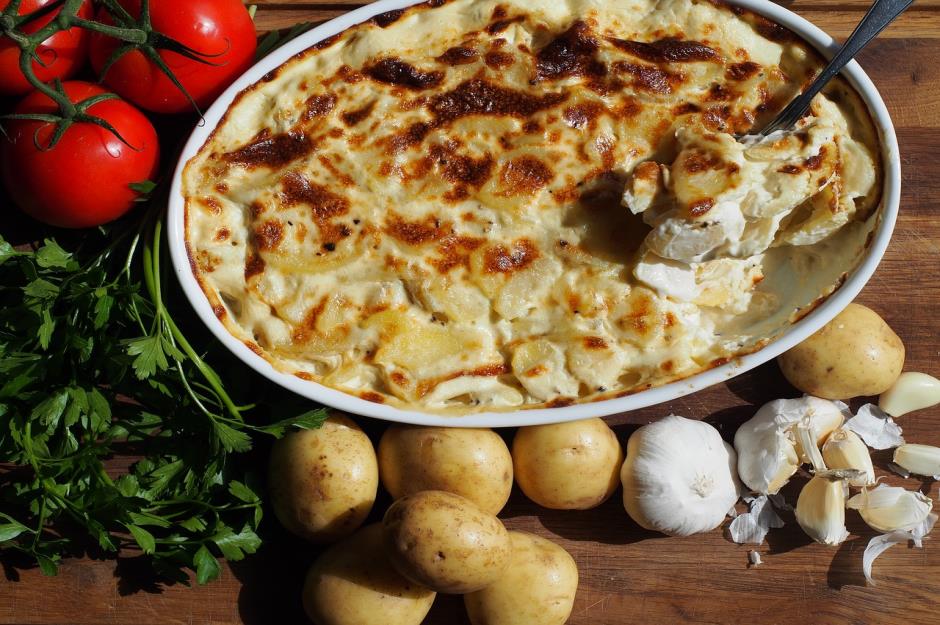 Potatoes and cream are a match made in heaven. There are few more delicious things you can do with potatoes than slice them thinly then slowly bake and bubble in garlic-infused cream. This recipe for classic pommes dauphinoise is a good place to start. 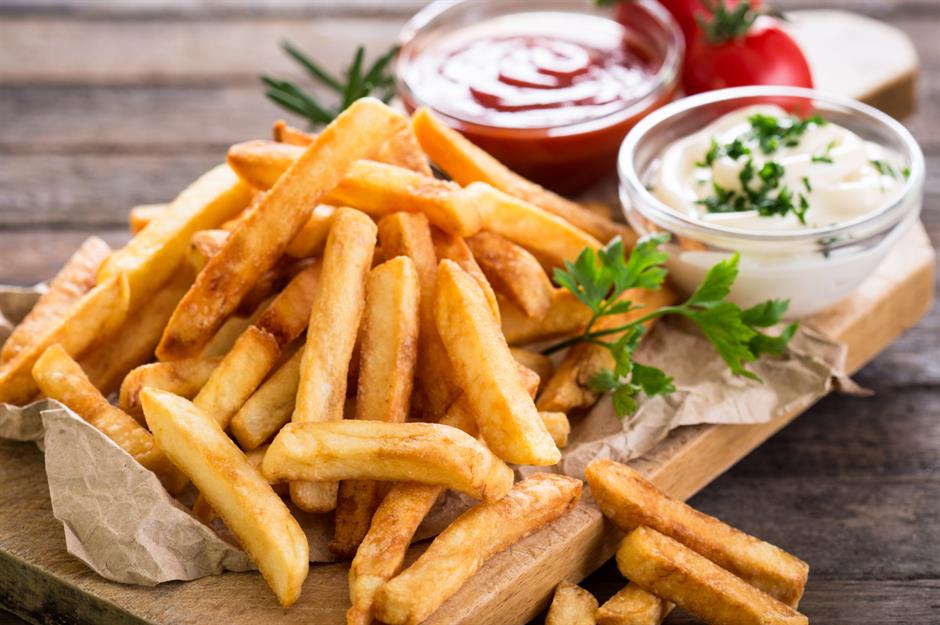 pilipphoto/Shutterstock
The secret to twiggy French fries is parboiling potatoes first and deep-frying them twice. Slice Russet potatoes to a quarter of an inch thick, blanch them in boiling water for five minutes, then air dry for 10 minutes. Next, fry them in small batches at 300°C (572°F) to cook evenly, then drain on paper towels. For the second frying, crank up the heat to 350°C (662°F) and sizzle until golden brown, roughly three minutes. Drain, salt and serve immediately. 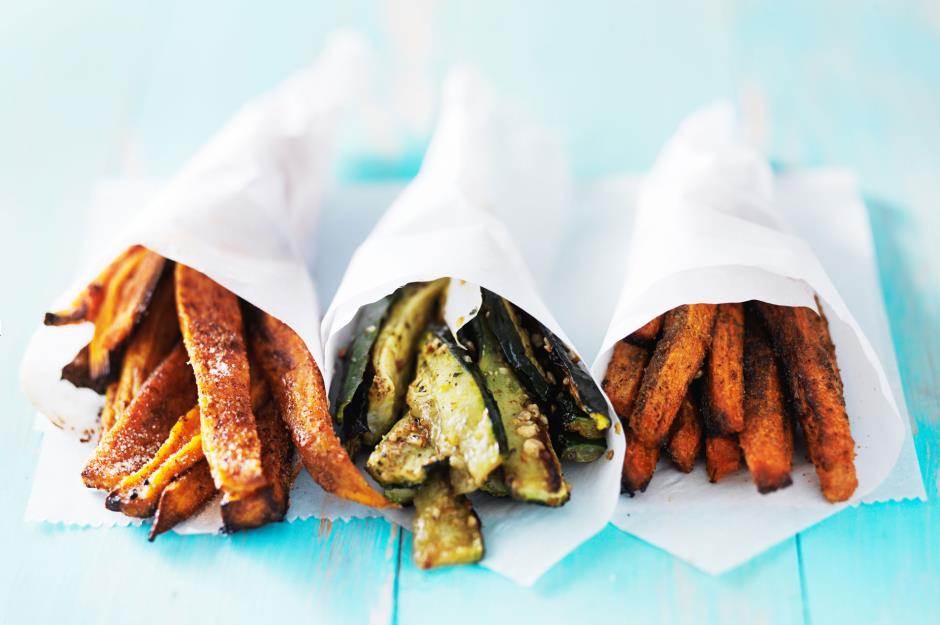 Make rösti with your grater 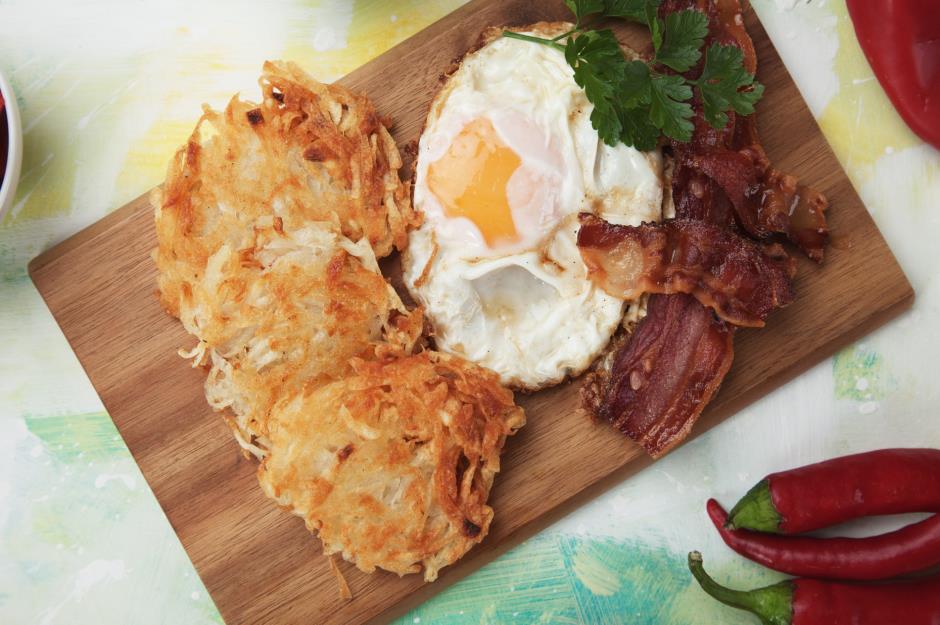 Hash browns and rösti are super simple to make at home. Just be sure to squeeze the grated potato in a towel before you fry it to get rid of as much moisture as possible. Once you've cracked the basic method, experiment with adding extra ingredients: we love this rösti recipe with cheese, ham and apple.

Make your own potato waffles

Crunchy potato waffles are versatile and work at breakfast, lunch or dinner. Prepare rösti or hash browns as you would normally then cook in a hot, oiled waffle iron for 5-8 minutes, instead of a frying pan. Check out other ways to make the most of your waffle iron here.

Sweet potatoes work just as well as regular varieties in everything from mash to waffles, and tend to cook a little quicker. Try this Moroccan-inspired baked sweet potato recipe or sweet potato röstis with poached eggs.

Read more: Everything you need to know about cooking with oil 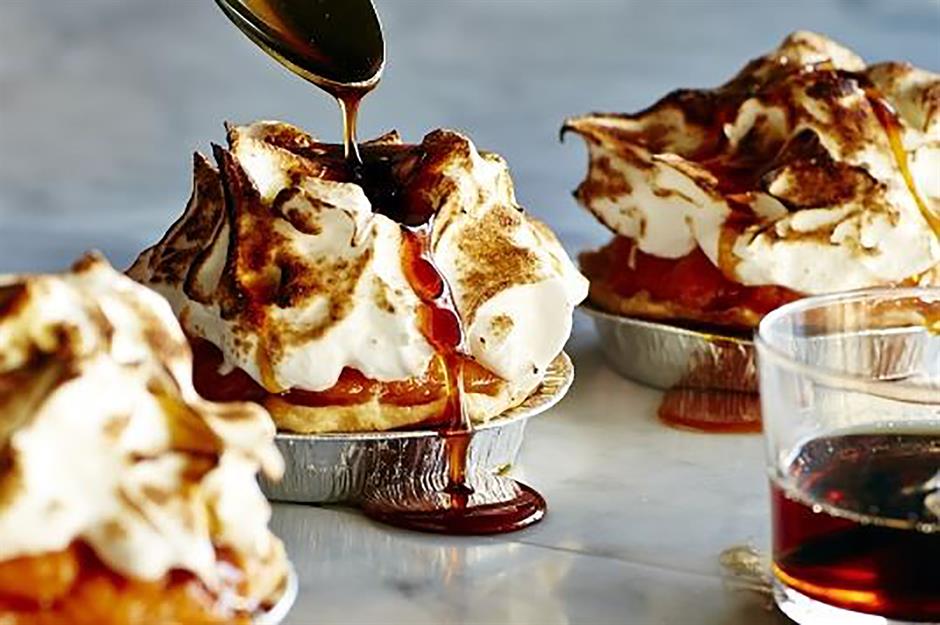 It might sounds odd but potatoes, and sweet potatoes in particular, are brilliant in some desserts. Give these mini sweet potato pies with a marshmallow topping (pictured) a try. And the secret to making gluten-free orange polenta cake moist? It’s mashed potato.